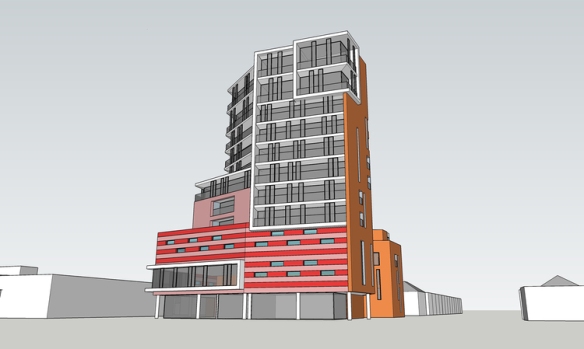 Detail from Catallax Point, 2014, a social project; the illustration is an unrendered projection of a fictional building design

An article published in the Hackney Citizen on 23 May last year featured a digital rendering of a high-rise apartment block under the headline, ‘Is this the future of Hackney’s iconic Rose Lipman Building?’. The article announced a one-day event the following month to discuss ideas, plans and desires for the future of the former library turned community hall, a site which the local Council had ear-marked as ‘suitable for redevelopment’. The accompanying image was a fictional proposal, commissioned from an architect by artist Jonathan Hoskins to represent one potential future: a blocky, jaunty building not unlike any of the other new-build apartments popping up frequently around London. Some readers, however, took the article as a statement of intention and the image as a confirmed plan. Property developers, residents associations and councillors were soon in touch – concerned, curious, angry. ‘No is the answer to your headline,’ was one comment to the online article. ‘A vanity student project is hardly news,’ ‘No and no again!’ tweeted Councillor Philip Glanville, the head of housing for Hackney. In response to the attention the article generated, Hackney Council also issued a statement that they had ‘no plans to demolish or sell the Lipman building’.

The article was an accident; Hoskins, then an associate at Open School East in the Lipman building, had been in touch with the Citizen to try to get his event listed in the paper and wasn’t aware of the story until it was printed, but it remains one of the few visible points of his project Catallax Point, 2014, a series of collaborations and events revolving around the uses and fate of the Lipman building. The project is symptomatic of Hoskins’s work, in that it exists primarily within a set of long-term relationships and concerns, addressing political efficacy, social groupings, urban change and folklore, and gentrification, looking at the history of housing associations and intentional communities; these processes eventually shape performances, texts, publications and events. Catallax Point, like much of Hoskins’s recent work, also revolves around his own east London neighbourhood of De Beauvoir. The newspaper article marks a point where the project achieved its own dubious success by removing it from the artist’s hands, the fiction of the not-yet-planned building instigating a wider, heated discussion. After the June meeting, two local residents’ groups assumed control of the project, forming an action group to ensure that their vision of the future of the site might be the one that prevails.

‘Social practice’ is something of a tautology, given that humans are by nature social beings and their artistic endeavours not only imply an expression of something but also to something or someone else. Words like ‘community’ and ‘social’, too, tend to be fetishised in the art world, used as conceptual crutches or as a means towards completing a solo artist’s body of work. Can we practically imagine art practices such as the neighbourhood building of Theaster Gates without the blue-chip gallery funding, or if Christoph Büchel’s Piccadilly Community Centre, 2011, had truly been a centre to be used rather than merely the temporary spectacle of one? Hoskins is part of a growing set of artists for whom direct social action, tempered by discussion and a consistent problematising of the issues at hand, is the work itself. What that action is, however, is up for grabs: it could be a neighbourhood debate or the indignant huff of a reader incensed by the Lipman article. For Hoskins, the word ‘community’ implies a conceptual containment, a smoothing-over of the dissent, disparities and disagreements within what has been identified as a group; instead, he describes his central concern simply as ‘the problem of sharing a possible future’. 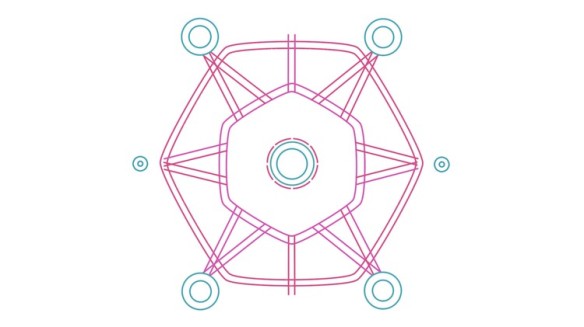 Image from the lecture-performance Recovery Position, 2015

In an interview, novelist Ian McEwan once said, ‘we need to play out our fears within the safe confines of the imaginary, as a form of hopeful exorcism.’ What to do, then, if you find your fears building themselves around you, within a social democracy that is dismantling itself and actively promoting inequality in access to arts, education and housing? Throughout Hoskins’s work, disguised fictions find their way into reality, not as a safe testing ground but as an actual tool for challenging the dominant narratives of some of those issues. De Beauvoir itself was a planned community from the early 19th century; its designs for an octagonal-shaped layout were never realised, but in his research and interviews, Hoskins found that the ghost of the neighbourhood kept cropping up, a vision for the area that was consistently looked back to. An abstract version of the design appeared throughout Hoskins’s lecture-performance Recovery Position, 2015, in which the artist narrated a set of diary entries that detail an ‘investigation’ of De Beauvoir. Charting the changes to the neighbourhood, he at times waxed almost nostalgic for the communal actions of the 1970s when a group of residents formed a housing association and purchased a row of houses the council had marked for demolition and development. It all seems an ideal image painted from archival research, a screen flashing images from maps and the neighbourhood newsletter De Beaver. But at one point in the talk, when he begins to speak to those mentioned in the documents he has been researching, things shift: ‘16th of March 2015 – It’s difficult to know where to begin. I have completed the interviews, I am exasperated. If I am to take my interviewees’ responses at face value, I can only conclude no one was there.’ No one remembers anything, or were absent from key meetings that they had been listed as attending. The archive itself becomes a different version of the past, like the alternative Lipman building site, a fictionalised potentiality that can still shape our desires for things to come. As Hoskins suggests, any planning or policy document is just a fiction that at some point has been chosen to be believed in.

There is in Hoskins work a privileging of place, focusing on his own front door, as it were. Recovery Position made use of some of the research that will be forming Hoskins’s forthcoming book project Own De Beauvoir!, a publication two years in the making to be released in January 2016, collecting interviews, photographs and documents from the aforementioned archive. His inention though, is to attempt to work against the notion of the free-floating, rootless artist, to address his immediate surroundings and to counter the form of contemporary cynicism that writer Peter Osborne has described as a ‘disillusioned “knowing better” but living no differently’. Hoskins’s earnestness is also tempered with a humorous – at times almost darkly so – reflection on the inane rhetoric that can come out of group politics and debate. Narrating Recovery Position, the artist deadpans several times, ‘I’m very active in the area’, as if to qualify his credentials. His publication Before an Emergency, 2014, is a short fiction that details a mysterious community action group of sorts, following a ‘Principle of Non-Contamination’ and ‘Principle of Aggregation’ in their crumbling locale. It descends quickly in a Pynchonesque farce, but it is hard not to think that it is only a very slight alteration of direct experience. Another performance set in Which Grounds Legitimate, presented at PEER in 2014, had a set of young performers in a circle enacting a hyper-theorised council meeting, trading dense statements and at times repeating them all together in perverse bureaucratic chants, such as ‘Legitimacy is more important than legality’. Certain key words trigger specific hand gestures: ‘common’, or ‘community’, an empty circle in the air; ‘resource’, a movement like squeezing a fruit in your palm. At these points, Hoskins seems to pose any group politics as a necessary, but bizarre, form of cult.

While Hoskins’s forthcoming research and work branches out towards other planned neighbourhoods and garden cities, it remains based within the limitations of what long-term relationships might produce and the questions of what constitutes efficacy and effect, accidental or not. Hoskins poses the artist as both an anthropologist of the local and an ambiguous activist, using the fictions of community as an instigator of incremental change. His embedded, openly subjective examinations of the political urge us to understand and contribute our own fictions to the city and futures in formation; as he states at one point in Recovery Position: ‘This world is now, as much as is it ever was.’