You would think the more we disappear into screens, the more we would forget about our bodies. Judging by the shows on this summer in London, the opposite seems to be the case. Whether it is the right sort of attention is another question, but it was filled with floating heads, phantom limbs and more 3D-printed objects than you can shake your e-cigarette at. Artist Will Benedict’s ‘Nuclear War: What’s in it for you?’ at Vilma Gold began with bodies on the streets of Berlin. Encountering the figurative, heavily allegorical public sculptures of Czech artist Ludmilla Seefried-Matějková from 1984-85 found in places like the facade of the criminal court, it’s as if Benedict gathered these six artists to retrospectively recreate the laden Cold War atmosphere which led to their creation. The title comes from a 1982 book informing readers about the facts of the impending fallout, and a bomb alarm echoes from a bunker built in the middle of the gallery. Inside, Seefried-Matějková’s On the Edge (1976-77) is a full-size polyester sculpture of a half-naked woman sitting on a bed, looking dejectedly into infinity. The sound comes from a small television in the corner playing KP Brehmer’s short black-and-white video Madame Butterfly (1969) reimagining Puccini’s opera as a raucous essay on transgression: at its close, we see a bottle of Coca-Cola on the ground and a communist star flashing intermittently on the screen. A naked woman walks over the bottle, squats, and begins moving up and down on top of it. This desolate bunker is surrounded by four of Brehmer’s large matter-of-fact statistic-based geographic paintings. Geography 3 Colours Localisation of Yellow/Red (1970) is a simplified map of South America with countries coloured pink, red, yellow and orange under the typeface heading ‘Investment Climate’. An adjacent key explains that Brazil in pink means ‘uncertain’, while Chile in red is ‘troubled’; Argentina and Colombia in orange, it seems, are ‘best’. 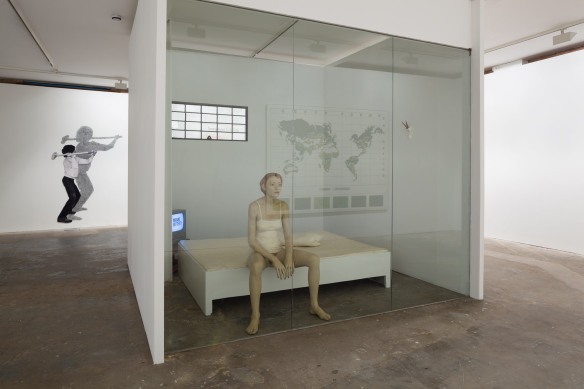 ‘Nuclear War: What’s In It For You?’, installation view, image courtesy Vilma Gold.

In the next room, we are bathed in a radioactive shade of orange, with tinted lights and painted walls and a single panel of apparently stolen perspex that makes up Gaylen Gerber’s Silver leaf, varnish on souvenir from Daniel Buren’s Crossing the Colours, a Work in Situ (2006). A slim figure in a full-body black leather suit and a Jackal-faced gasmask stares out at us from Will Benedict’s 2014 photo print that is eponymous with the exhibition. Working with mostly older artists and artworks, Benedict’s ambitious installation scenes feel like teasers from a larger museum-style show on politics, realism and annihilation; in such a small dose, though, the activisms and anxieties here seem cartoonish and cutely outdated. Through the hallucinatory orange haze, it seems as though Benedict is yearning for the earnest polarities of the Cold War days, when artistic gestures could be political with a forthright, and fairly po-faced, literalness.

A man stands in a dark room, window blind slats of shadow and light running over his bored face and slouched posture. Eloise Hawser’s video Sample and Hold (2013) shows the artist’s father as he is being 3D scanned; in the next room, Medivance, 2014, is a 3D print of his shoes in green rubber that sit empty on the floor, as if he has been uploaded, Tron-like, into the digital ether. ‘Ends Again’ at Supplement brings together four female artists in a small show which looks, as many recent exhibitions have, at ‘the body and the self in relation to technology’. Here, the topic benefits from a modest scale and a set of approaches which don’t quite gel together as they each try to trace where the body has gone. And it has already gone: Jesse Darling’s slight Standing Sculptures (2014) are steel stands draped with power cables, light bulbs, bungee cords and packing air pillows, like temporary accidental sculptures left behind once the logistics workers have walked away. Even the non-humans here are worried about disappearing, with Cecile B Evans’s Serpentine Galleries resident AI bot Agnes going through an existential crisis in the video AGNES (the end is near) (2013-14). Philomene Pirecki’s Image Persistence (2008-2014), a set of six photographic prints in which an original black monochromatic photogram is re-photographed each time it is shown lines the wall: gradually, layers of the artist taking the picture and surrounding light in recapturing the recapture turn it into a blurry, collapsed and vacuous hall of mirrors. ‘Ends Again’ ends up feeling like the waiting room for a clinic addressing a new, digitally inflected strain of body dysmorphic disorder, obsessing over proxies and stand-ins, haunted by the figure that has left the building.

The building, though, was more the concern in ‘A Merman I Should Turn To Be’, a branching eleven-artist group show at Laura Bartlett Gallery curated by artist Dan Coopey. Three slabs of red brickwork lean against the wall just inside the door, two bags of bright orange powder sitting on top of them. It looks like could be a psychedelic concrete dye, but it is actually processed cheese dust, Rupert Ackroyd’s Untitled (2012-14) providing a surrealist construction worker’s introduction to the show. At the heart of the exhibition is Graham Ellard & Stephen Johnstone’s floating and wondrous 16mm film Machine on Black Ground (2009), a montage of shots of stained glass and concrete facades, the close-ups of coloured squares animating the ambient soundtrack as if part of a hand-wound music box. The layers of the film begin to unpick themselves over its 14 minutes, mixing original and archival footage of the creation of Coventry Cathedral, and excerpts from a 1976 Tangerine Dream concert in the cathedral, which provides the pensive and resonant music for the film. Weaving between shots of a model of the cathedral before it was built and the building itself, and between the modernist stained glass of Basil Spence’s circular Meeting House in Sussex, and the Kaiser-Wilhelm-Gedachtnickirsche, Berlin, it melds into a mesmerising flow that atomises these bulky icons into their basic units of light and colour, turning walls into potent abstractions. 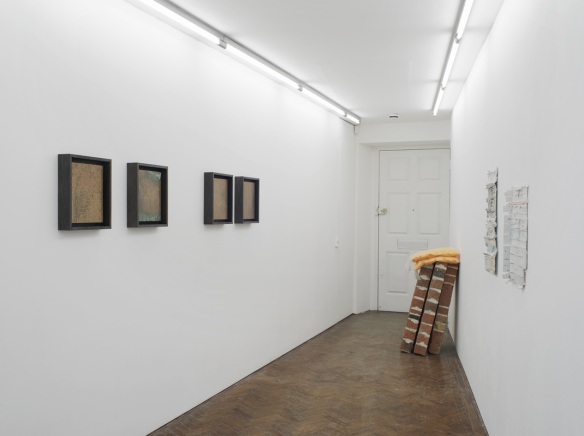 That seemed to be the aim with ‘Merman’ overall: trying to focus on how a range of artists absorb and dissolve the things in front of them into more malleable matter. While the film was the most effective at this, other works hovered around it like attendant thoughts. Alex Dordoy’s Super G3 (2014), for instance, silicon casts of what look like printer and photocopy cartridges hung flat on the wall, become uneven textured surfaces that seem to sit uneasily trying to pretend to be paintings. Coopey’s own copper etchings of images of machine parts adapted to make swirling patterns are partially oxidised, giving them an archaeological feel. Piling on such moments, some more melodramatic, some more incisive, Coopey manages to create an atmosphere of dream-like potential, an accumulation of attempts towards unmoored patchwork surfaces. Like the Jimi Hendrix song the show takes its name from, it is comfortable being meandering and indirect, acknowledging that some things can only be examined obliquely.