“Write down a desire,” comic book writer Grant Morrison advised in his wildly engaging talk at the 2000 DisinfoCon, “take out all the vowels and the repeated consonants, and turn that into an image that looks magical.” Coming up on drugs, speaking to a crowd of conspiracy theory devotees, Morrison describes a simple entryway into magic, trying to revive the sigil practices of people like artist and occultist Austin Osman Spare, a spell of sorts meant to focus a wish into something realisable. “This shit works!” I tried it once. It didn’t work, but it says a lot about the self-fulfilling determination of magical adherents: if you’re looking for something hard enough, you’ll find it in some form. An undecipherable glyph of jumbled letters – an e, an i, a backwards c and k – painted in faded reds and blacks adorns the stained cloth banner of Elijah Burgher’s Mictlantecuhtli’s grin (2013), which presides over ‘Alms For The Birds’, an eight-person group show curated by artist (and Turner Prize nominee) James Richards. This compact but pleasurably elusive exhibition is filled with remnants, tokens and traces that, like Burgher’s sigil, leave us to imagine the desires and strange rituals that led these artists here. 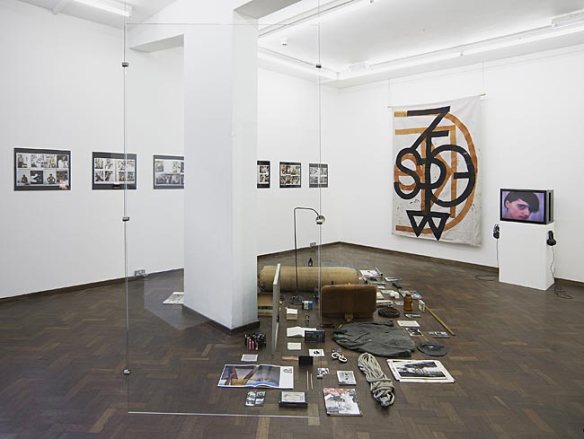 ‘Alms For the Birds’, installation view. Image courtesy the gallery.

What does seem evident is that those rituals were fetishistic, sex-fuelled affairs. Lining one wall is Maracaibo (1991), an edition of prints by General Idea reproducing 20 pages from a friend’s private photo album. They feature dozens and dozens of men, in various states of undress and arousal on the same bed; some are relaxed or coy, a few are defiant, arms crossed and stern-faced to the bulb’s flash. Scattered on the floor is the work that gives the show its name, Adrian Hermanides’s Alms For The Birds (2009), itself referring to the Buddhist ‘sky burial’ practice in areas like Tibet where a body is left outdoors for the elements and beasts to make of it what they will. Hermanides’s ‘burial’ is a collection of items found in a Berlin apartment, and from those remains we can struggle to piece together a personality: a felt uniform, a leather mattress, some cameras, photographic magazines, and lots of images of apparently homemade erotica. Hanging from the ceiling around this constellation of objects are Tony Conrad’s two Untitled (both 2014) works: thick glass rectangular panels, each with a small hole drilled through them. Blocking the viewer from approaching some items and framing the rest of the small room, these begin to feel like windows into some sort of peep show, and suggest, as we pick at the remains of the German amateur pornographer and Maracaibo’s hidden photographer, that we are the birds that are being fed.

Haunted by these elusive, absent characters, ‘Alms…’ holds up a set of vessels in which we can find and project a series of narratives and identities. Richards sets up a skilful balance of denial and intimate disclosure that poses our act of projection itself as a form of practical, banal and immediate magic, and suggests that, as Morrison suggests, magic can be found in anything, if we want it to be there.