‘Some lines shouldn’t be crossed’, ran the tagline for Joel Schumacher’s hammy 1990 thriller Flatliners. In the film, the vision of the afterlife momentarily encountered by the daredevil medical students is one of guilt, each haunted by past actions. The by-now familiar melodramatic scenes of near-death experiences (NDEs) – out of body perspectives, lights at the end of tunnels, encounters with long-gone kin – are all there. If Kiefer Sutherland being dead, even if just for 12 minutes, wasn’t enough for you though, you could find all the NDE tropes laid out in long form in Susan Hiller’s installation Channels, 2013, at Matt’s Gallery. A babble of voices streams from a wall of TVs and aged monitors, either blank, static or a solid blue screen, as if we have managed to stumble upon the same after-hours channel as the little girl in Poltergeist, 1982. Gradually an audible voice emerges from the noise, recounting their disembodiment, or feelings of universality and so forth. Despite the supposed insight of the confessional format, hearing a series of personal recountings in succession renders them generic, as though Hiller is not interested in the individual peculiarities of the stories themselves, underscored by their delivery with the flat over-enunciation of a voice actor. The barrier of screens reinforces this: it is a line we literally cannot cross. Hiller’s way of providing the collection of anecdotes acknowledges that whether they are true or not is not the issue but, rather, that we are well aware of these stories via any number of media sources, like Flatliners, The Twilight Zone or The X-Files.

For Hiller, the afterlife is irrelevant, it is already static and can only ever remain fixed at a distance. Wading through the late winter sea of reliable big-name exhibitions and sure-fire shows, though, the dead zone of the afterlife was never that far away. Kris Martin’s series ‘Lost Wax’, 2013, at White Cube Mason’s Yard might take its name from both the technique used to create his bronze casts of honeycomb and the original bees’ wax, but the material pun doesn’t make the end result any more interesting. The 16 panels sit mute, still clinging lazily to clusters of the plaster used to make the moulds. Downstairs, over a hundred tall, slim unmarked sandstone gravestones have been lined up in five rows like giant dominoes ready to be toppled with one push of the finger. That is, of course, if you were allowed anywhere near the sculpture. Cordoned off at one end of the cavernous basement, the work is stripped of any physical impact and might as well be a drawing of the one-liner it represents. The line of wire across the room ends up turning the work into a pun on its own death and the whole show a pointless paean to self-defeat.

On the other side of Mayfair, Michael Werner Gallery gathered a mini retrospective of the deceased James Lee Byars. A small room is crowded with sculptural anthropomorphic forms staring back at you, works from the 1950s and 1960s with craggy, cartoonish features and vacant round eyes. A small-screen plays the one-minute loop of Autobiography, 1970, which is mostly static, with a bluish tinge to the murky image in which a tiny figure in white appears at a distance for only a moment. A rope runs across the frame of doorway at the back of the room where we can lean in to see The Angel, 1989, on the floor of a back space. A pattern of large glass spheres that looks something like a stylised, curling plant – you can tell it is fragile – but all you can do is rely on the rote information handed to you about the work: that it consists of 125 hand-blown glass globes in the shape of the Japanese logographic kanji character for ‘man’: each made by one breath of the glass blower in Venice. Like the fleeting figure in the static mist of Autobiography, we are denied any direct, intimate experience of the work itself. Byar’s lifetime of work contained moments of quick, ephemeral poetry, usually presented incongruously alongside glitzy bombast; regardless of whether the combination appeals to you, this show managed to keep both at bay. 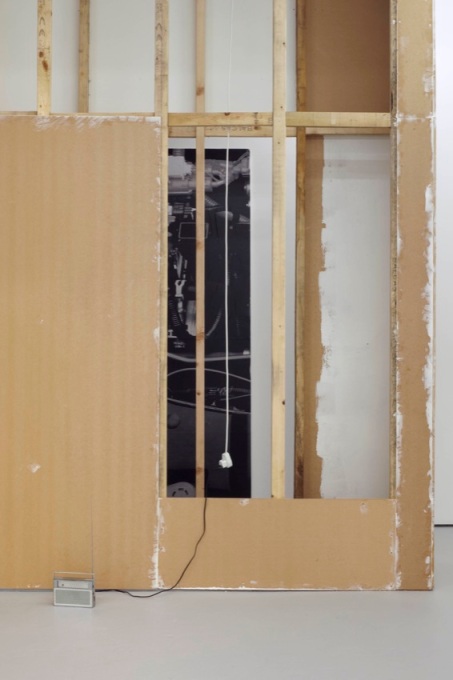 By contrast, we are explicitly told to ‘walk inside the wall’ when you enter Steve Bishop’s ‘An Escalator Can Never Break, It Can Only Become Stairs’ at Carlos/Ishikawa. You forget the instruction, or at least you don’t know what it means, until you have rounded the half-finished L-shaped wall partitioning the room and step over a radio playing floaty, Muzak-like piano riffs into a half-metre wide corridor within. Shuffling to the dead end, a small monitor on the floor plays When The Lights Go Out You Keep On Moving, 2013, a short video of what looks to be a showroom for revolving doors. We get close-ups of hinges and sliding doors in soft focus, the elevator music lulling us into feeling like we are stalking a closed, partly dismantled mall. In part, the show muses on the strength and mutability of corporate interior design: Lamp Looks in Different Light, 2013, is a set of tiny inkjet prints dotted around the room of one innocuous lampshade in slightly varying light levels: the difference is minimal. How Can One Thing In General Be Many Things In Particular?, 2013, is a cream-coated sheet of steel, at once resembling the panels that outfit any number of industrial constructions, whether a computer or a desk, while also positioned as a painting that could reference any number of all-white canvases from art history. (Bishop’s issue of MONO, released with the show, playfully reproduces several of these – photocopied in black and white, of course.) In one corner the door of a storage closet has been replaced with transparent film so we can see the mess of wood, boxes and packing foam inside, alongside a neon sign for the cafe that perhaps used to occupy the space. If Everything Has a Place then Place too Has a Place VIII, 2013, is part of the artist’s series of wall and partition removals across several of his exhibitions. It might expose some of the inconsequential, hidden aspects of the gallery workings, but here the casual Gordon Matta-Clark gesture seems of a different tone to the rest of ‘Escalator’, enacting a barrier crossing that undermines the studied, pointed blandness of the show.

Back in Matt’s Gallery, Mike Nelson’s untitled installation throws wide the floodgates with typical excess. A fantasy hillbilly graveyard, the room is filled with hundreds of bits of wood, metal and scrap trying to make themselves into sentient forms. Skulls and casts of monster masks perch on top of vaguely human-shaped assemblages, spider-like sprawls of iron wire squat next to chicken wire barrels that hold lumped blobs of concrete instead of fire. We are free to roam this wasteland of failed totems, the half-formed objects suggesting a setting (rather than Nelson’s normal commandeering of one), what feels like the abandoned, burnt out remains of a settlement built at a closed highway exit. This is Nelson’s sculptural afterlife, goading us to join him like Sutherland in Flatliners, ‘Today is a good day to die.’ Nelson’s only mistake may be in assuming he can force us to cross the line with him.