So you might have seen the ‘Japan Tron Dance’ video gone viral, the Wrecking Crew Orchestra’s remote-controlled LCD suit extravaganza to a medley of Daft Punk, Justice, and Flux Pavilion . If not, here it is:

What makes me want to write about this is their use of the lighting to create a stop-motion effect (see around 1:35 and 2:29). The individual choreography itself isn’t that interesting – a bit of nu-street dance hand and shoulder waving- and the group coordination- their alignments, directions and gatherings- are not animated or made interesting by their own movements but by the technological choreography. The control of the body lighting makes their efforts sequential, turning the stage into an open screen where we see many bodies illustrate one movement crystallised into frozen, momentary segments. 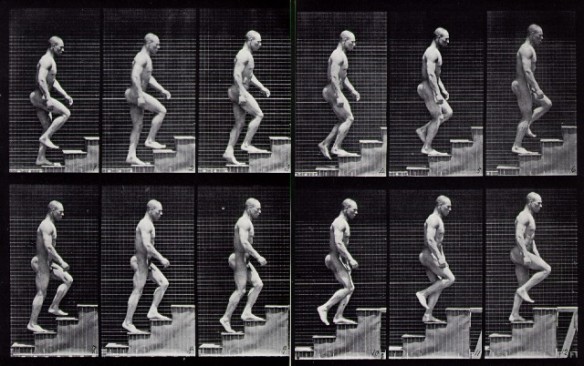 It brings to mind Kurt Vonnegut’s description in Slaughterhouse Five of how Tralfamadorians see humans: seeing in 4 dimensions, the past and future along with the present, humans appear like some sort of centipede, with little baby legs at the front, and old-age legs at the back. Or maybe, on a cruder level, the more literal joining of bodies in Tony Six’s trash horror film The Human Centipede. It is an updating of Muybridge’s stills of bodies in motion, via the mind of Moebius (aka Jean Giraud), whose concept work on the original 1982 Tron film storyboards and character design helped define cyberspace as a slick neon, mostly deserted metropolis. 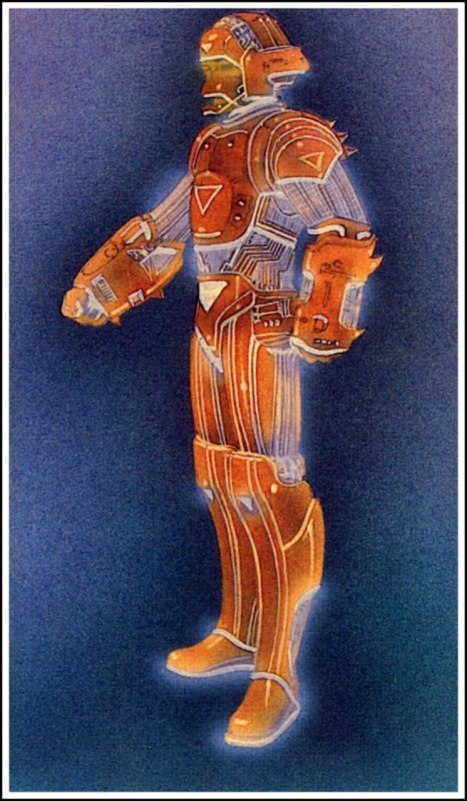 A slight detour – Juan Cole has already posted about the Tron dance in relation to Moebius, though he sees it as the “universality of science fiction themes;”I find that a little too pat. Let’s say we take 2010’s Tron: Legacy as some sort of focus/starting point for the rehearsal of technological nostalgias- Brad Nguyen on Screen Machine points out that it bears a lot of plot and structural similarities to the Wizard of Oz, citing Žižek’s reading of Oz where authority is revealed as illusion, but the power of the illusion still remains. The wizard is revealed as a powerless old man, but he still has the ability to confer a heart, a brain, and courage to the wayward travellers. In Tron, the father is revealed as powerless, but still remains a deity. In the opening to Tron: Legacy, Jeff Bridges narrates his digital landscape:

“I tried to picture clusters of information as they moved through the computer. What did they look like? Ships. Motorcycles. Were the circuits like freeways?”

The lines form a grid, which becomes a real city. It’s here where the sweeping city views (whether real or digital cities) combined with the Daft Punk’s soundtrack bears more resemblance to a more recent film – Drive. I can’t find any decent online clips of the sweeping city scenes in Tron: Legacy, but for now compare this with this– the city as cybertopia. Moebius’s sweeping landscapes come back to us as something that has already arrived. [So then if Tron is like the Wizard of Oz, and Drive is like Tron, does that make Drive like the Wizard of Oz? I’ll leave that one for now.]

What WCO’s video poses is something like the disco scene from Tron: Legacy: a bunch of computer programs who live in that cypertopia, for some reason, dancing. Not just dancing, but rehearsing the origins of animation and motion pictures within this dated cyber disco fantasy. Or, we can say it’s dated because the costumes have arrived to us via an 80s film that uses an easy anthropomorphism (programs are people, my friend!) to idealise a nascent technology and was shaped by someone who defined the sci fi and fantasy genres in the 70s. But then it is exhilarating just seeing this rehearsal of old concepts with new technology. Greil Marcus might have pronounced MTV dead on arrival, but the music video remains the most lively and alluring proponent of spectacle still active, and any ironic comments on that (whether Hot Chip or Lady Gaga) still manage to succeed in bolstering the medium’s enduring effect. Muybridge’s studies in rapid motion photography gave a segmented break-down of the body in motion, but also parcelled out motion as a spatial sequence that it could be re-assembled. His invention of the zoopraxiscope was a way of showing his findings in motion, his 1882 Horse in Motion considered by many as the first moving picture, and a heavy influence on the development of Thomas Edison’s Kinetoscope. The WCO’s real-time stop motion removes the camera, instead using the lighting signal to give us a hyper-zoopraxiscope visibility; technology still remains the mediating factor in determining the visibility of motion, but theirs is a borg dance, the many bodies fulfilling one motion, a futuristic proto-cinema. In connecting Muybridge-Lumiere/Edison-Moebius-MTV-Gaga provides a slick history in miniature of the the alluring choreography of the technological spectacular.